THE PSY-NAPS GROUP
The Psy-NAPS group carries out research that relies on various different equipment.
A description of the equipment that is used (owned and loaned) is presented below. 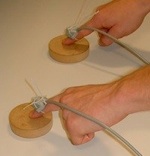 The Psy-NAPS group uses a Polhemus 240HZ system. The equipment allows the recording of simple actions by creating a magnetic field within a work space and measures how the field is distorted by electrical markers placed on a moving body part. The system is able to calculate 240 3D coordinates for each of the six marker positions every second. The equipment was funded by the Fonds Speciaux de Recherche: Budget Jeunes Académiques, BE. 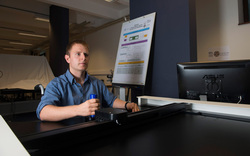 The Psy-NAPS group collaborates with Julien Sapin who develops robots with the spin-out company Axinesis. The robot has an active interface allowing for accurate motion analysis of actions in a passive mode, and action facilitation possibilities when in an active mode. We have four robots, three in different hospitals and one in the Psy-NAPS laboratory. The three robots in hospitals were funded by the DG06 Programme Wallonie-Bruxelles Health Exercise and the robot in the Psy-NAPS laboratory was funded by a ​F.R.S. FNRS: Programme of Research Project.

The Psy-NAPS, SpringLab and Numerical Cognition groups at the Université catholique de Louvain jointly gained funding for an EyeLink 1000 eye tracker. The equipment works by measuring the distance between a light source reflection on the eye ball and the center of the pupil, up to 2000 times a second. The equipment was funded by the Fonds de la Recherche Scientifique - FNRS: Fonds de la Recherche Fondamentale Collective.

The Psy-NAPS group uses ePrime, PsychoPy and PsyScope experimental software to measure reaction time responses to various stimuli and tasks on a computer. The computers and software are funded by various different sources. In all, we have approximately 7-10 research laboratory computers.

A number of established dexterity and neuropsychological tests have been purchased or created by the Psy-NAPS group to measure simple dexterity performance (e.g., the Box and Block Test, the Purdue Pegboard Task etc.). The laboratory is currently creating new measures for experimental and clinical use.

The Psy-NAPS group uses Transcranial Magnetic Stimulation (TMS) and Transcranial Direct-Current Stimulation (tDCS) facilities at the Université catholique de Louvain. Both types of equipment moderate brain activity. The TMS works by creating a magnetic field around a coil and the tDCS works by generating a small electrical stimulation. Both stimulations moderate brain activity. We use the equipment to measure the brain pathways used in perception and action.

The Psy-NAPS group uses two brain imaging scanner facilities in the clinics of the Université catholique de Louvain. We use the scanners in three ways:

The Psy-NAPS group has access to a 32 channel ANT EEG system. The equipment was donated by Bruno Rossion. We are currently using the equipment for measuring the neural processes of action imagery. We are also using the same equipment and measures as a Brain Computer Interface for the control external effectors, such as virtual environments and real robots.